Most businesses today are completely dependent on having a reliable source of electricity in order to function normally. But it’s not just complete power failure that can cause businesses to cease operating…

To manage the risks associated with each type of power failure, you need to create a business continuity plan to protect your equipment. The first step is to gain an understanding of how much power is needed, for what purpose, and for how long. For example, a small business may require sufficient backup power to safely shut down its servers, whereas a bank may require extended runtimes to continue powering its banking and security systems to monitor and protect its premises.

Most standby power systems will involve the use of an uninterruptible power supply (UPS). The UPS either carries a load to allow data to be saved and systems to be shut down correctly, or it acts as a bridge between the mains failure and a longer-term backup supply, such as a generator.

Most UPS use batteries for power storage, linked in with a battery charging system and either a single or double inverter system. Whilst all UPS act to maintain continuity of power, there are differences in their operation, reliability and the level of protection against fluctuations such as surges or spikes.

There are three types of UPS available. Here’s a brief overview of each type:

An offline UPS is the simplest and least expensive type of UPS, but it offers limited surge and spike protection. In normal operating mode these units have two operational circuits: an AC circuit fed directly to the load and a feed that charges a standby battery via a DC charger. In normal operating mode, power passes from the mains directly to the load with the secondary circuit charging the standby batteries. During a power failure the UPS detects the reduction in voltage and automatically switches the load so that it is fed by the standby battery via a DC/AC inverter.

An offline UPS is the most power-efficient system because the charger and inverter aren’t always operating and therefore don’t consume power continuously.

The reliability of modern technology makes failure of a UPS less likely than ever before. However, because the inverter for offline UPS is only operational when the mains supply fails, it is rarely tested under load conditions. This means that the only time an offline system can fail is when it is needed. 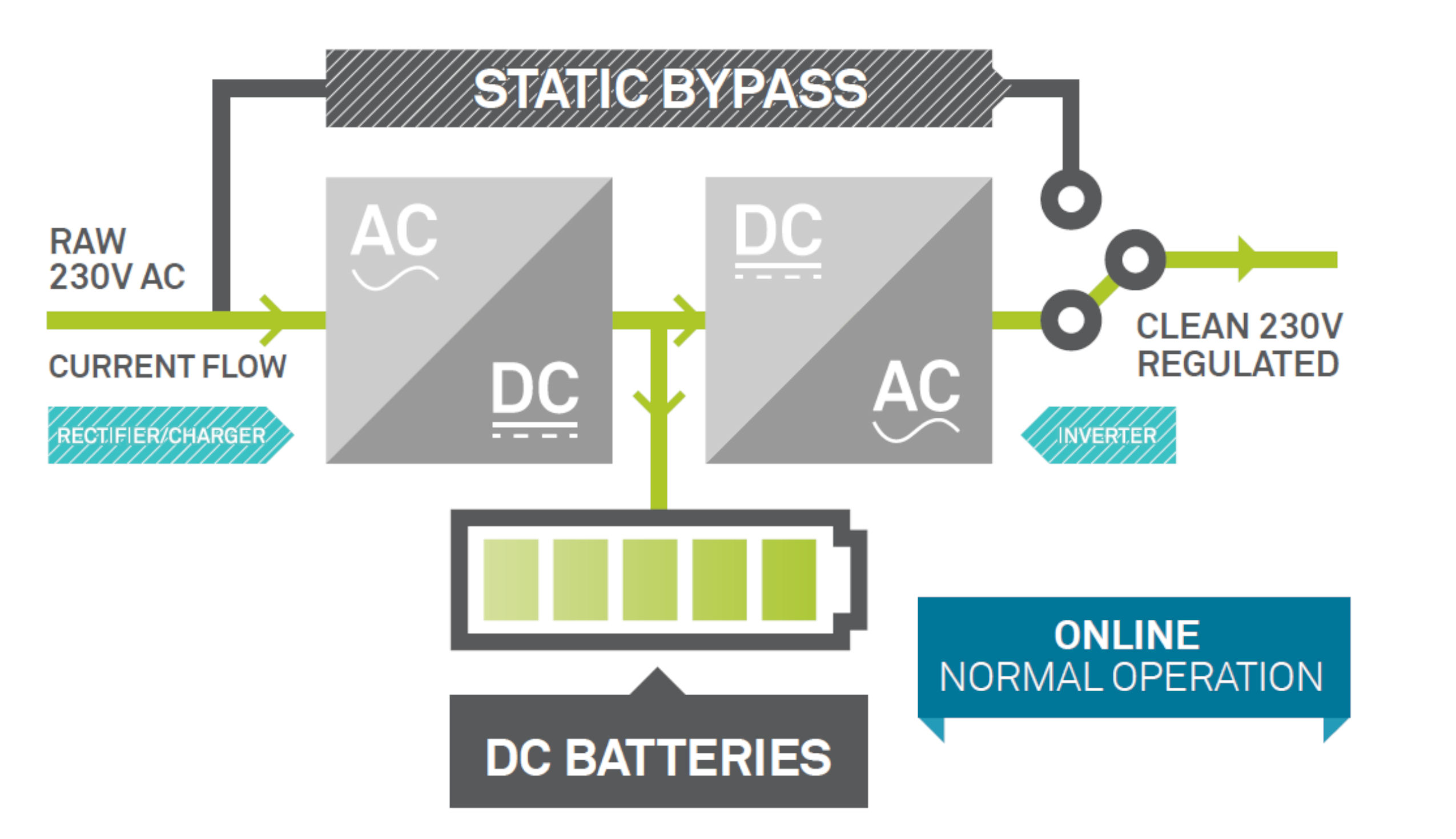 Also known as ‘double conversion’ UPS, this is an ideal system to specify when coupled with a generator or other longer-term backup system. Most units over 10kVA will now be online or line-interactive systems. Unlike an offline system, an online UPS provides the load with a cleaner, more regulated power source. In contrast to an offline unit there is no direct route between the mains supply and the load. After passing through a surge filter, the mains voltage is converted from AC to DC via a rectifier. This charges the batteries and feeds the second (double) conversion from DC back to AC via an inverter to feed the load.

It’s a more expensive system, but it’s also more reliable because the inverter is running continuously. And this offers a greater level of protection against surges and spikes, sags, brownouts, electrical noise and harmonics, as well as a complete power failure.

Advances in online units mean some can now operate in economy and smart modes to improve efficiency when critical loads are inactive, for example at night. 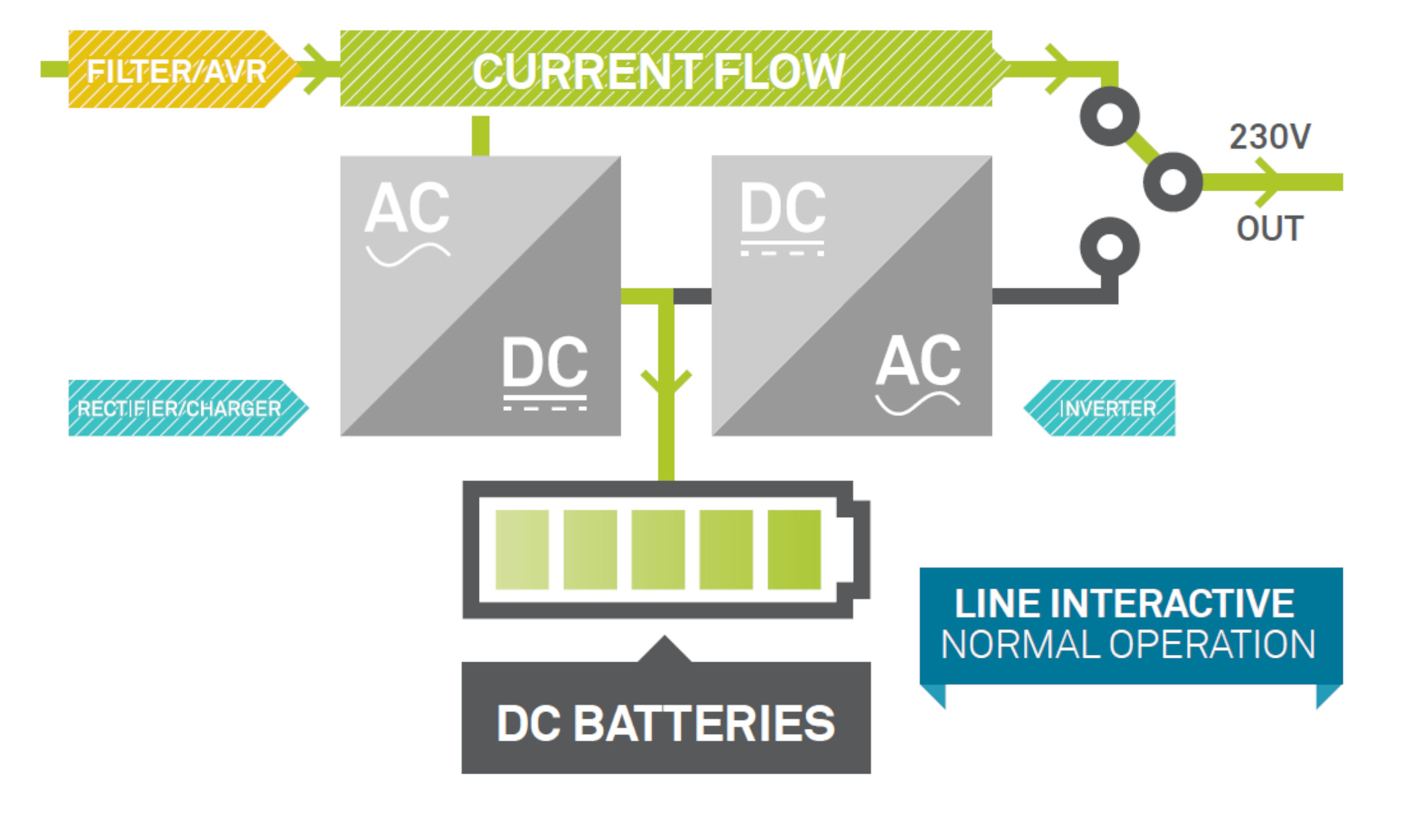 A line interactive UPS can be loosely described as an offline unit with a much greater level of voltage stabilisation and power conditioning.

In normal operation, the line-interactive unit feeds mains power through a voltage stabiliser and conditioner (AVS) to the load. At the same time, it feeds a battery charger linked directly to the standby batteries. During a mains failure, the load is switched from the AVS to the standby batteries providing power via a DC/AC inverter.

Line interactive UPS systems are efficient and offer lower running costs than online systems. The UPS’s lifetime is also increased as wear and tear on the batteries and inverter is reduced, because the load is transferred through to the inverter less often. However, line interactive UPS offer less protection against variations in electrical frequency and harmonics than online units.